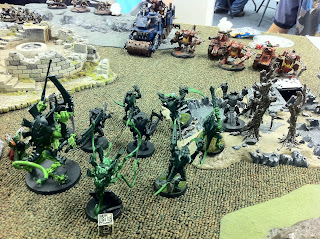 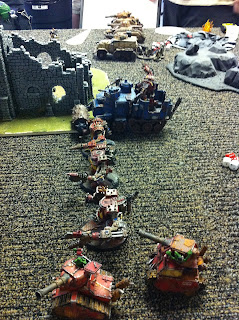 Level of play was very high, reflected in close games through all three rounds--and above average Sportsmanship scores for virtually the entire roster of teams. That's well-known as a point of emphasis for events I moderate--play which results in players having fun keeps players in the hobby--but it created a real logjam at the top for the Best Sportsmen prize: when bonus points for being named Favorite Opponent were added to each round's score, three teams were tied for high score, with three more only a single point behind. Winning team Barret and Chuck were the only players to receive maximum scores for each round, which broke the tie, but kudos to Chris LaJudice/John Saxin (Chaos Space Marines/Tyranids) and Josh Sherman/Brady Allen (tied for Best Sportsmen) and John Laird/Ben Chukmuwa (Space Marines/Blood Angels), the Smelleys and the Pistoles for finishing a single point off. 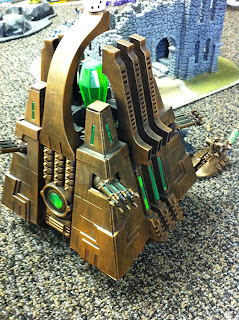 Kudos to the community, as well: three teams cancelled at the last moment (one late Friday, two Saturday morning), yet enough players showed up in hope of playing that the event was still full, with late arrivals staying to play each other and even demo games for interested passersby/potential new hobbyists. It was a fun day of 40K.

Finally, thanks to Gunslinger Games for hosting and providing over $120 of prize support; look for Games Workshop to continue to increase it's presence at the store, based on the success of these events. More of which to come--watch adeptusnorthtexas.com for details!