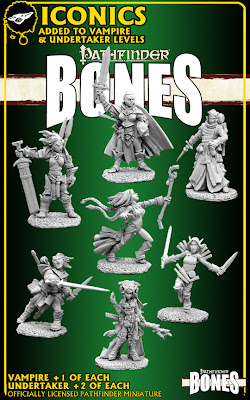 Reaper Miniatures is a North Texas-based company, and has long been a friend to the local gaming community (including prize support for events such as Astronomi-con Dallas); they have turned to the public-funding site Kickstarter for financing to greatly expand their 'Reaper Bones' line of unpainted plastic versions of their beautifully-sculpted, diverse, traditionally metal hobby figure lines, and have been embraced: with a week of funding left, they are approaching one million dollars raised.

In response, they have set--and achieved--numerous goals, with the result that several pledge levels--specifically, the $100 'Vampire' supporter level--have so many miniatures available either as a direct pledge reward or as a purchase option that supporters will be getting model figures at well under a buck each, a huge discount over their eventual retail.

While most of these figures are likelier to find homes on Pathfinder or D&D rpg tables, there are 40K- and Fantasy-related applications (I have the odd Werner Klocke Reaper sculpt in an Inquisitor warband or two), the Chronoscope and Pathfinder lines have numerous SuperSystem/Superfigs applications...and the Reaper people are very, very easy sorts to support. If this intrigues, take a look: