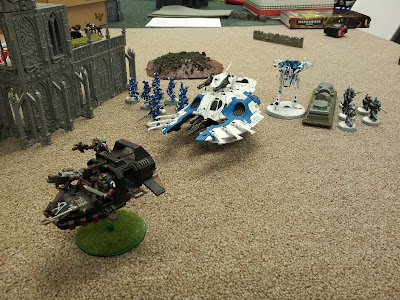 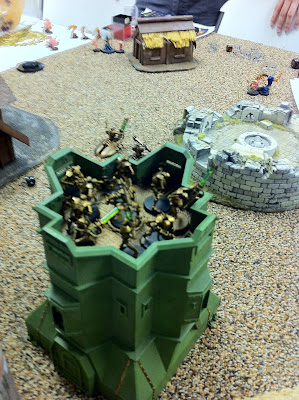 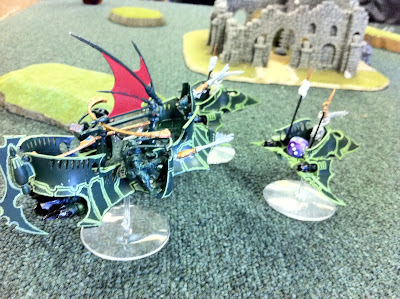 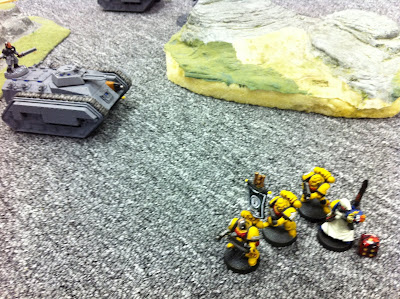 Enthusiasm was high, and considerable fun appeared to have been had; over $75 in prizes was a nice return for an afternoon's pitched battle (thank you, Gunslinger Games). Watch Adeptus for another, soon.

Gunslinger Games will welcome hobbyists to Warhammer 40,000 Sixth Edition on Saturday, July 28 with a Combat Patrol Tournament from Noon till 4pm!

Combat Patrol forces are 400-point-maximum, no Allies armies chosen from one in-print 40K Codex which *must* have at least one core Troops choice; the remainder of the Force Org can be chosen from a maximum of one HQ choice (maximum 2 Wounds, no 2+ Saves), vehicles with a maximum AV of 34 (adding Front, Rear and Side Armour [once]), and units which do not exceed 2 Wounds and do not include 2+ Saves. A Combat Patrol Commander figure must be identified; this will be the HQ choice if taken, or a unit leader otherwise. The HQ choice will be able to roll on the Warlord chart for this event if ordinarily eligible to do so. Fortifications *may* be chosen for this event as part of the player's 400 point force, as per V6 rules.

Participating players must also have at least two printed, legible and accurate Army Lists, one of which will be turned in to the moderator for verification before the first round begins.

Models must be primarily Citadel miniatures, fully assembled and properly, legally based; as an introduction to V6-oriented event, forces need not be fully painted *but* there will be a prize for the Best Painted Patrol and every effort will be made for players with painted armies to play opponents with painted armies.

The event will consist of three rounds, following this schedule:

Prizes will be awarded as soon as final scores are tallied; the event should be concluded before 4pm.

Prizes in the form of Gunslinger Games gift cards will be awarded for Tournament Champion, Best Sportsman and Best Painted Patrol.

Games between any players who are also participating in the North Texas Norh'Tek Nebula V6 Campaign will count extra, and have special campaign conditions in play!

Come spend an afternoon getting to know 40K V6 at Gunslinger Games Saturday, July 28 from Noon to 4pm, at the first Sixth Edition Warhammer 40,000 Combat Patrol!
+++