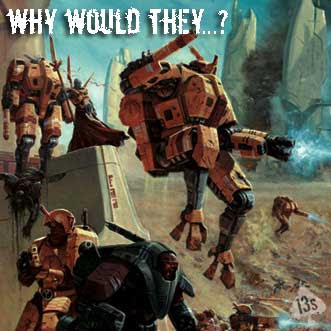 As battle raged across the tomb world of Glavinus 5/7 between the Imperium and the Tau, with Necrons being awakened all across the forbidden world's surface by the combat, the High Command of the Mordant 13th concentrated the efforts of much of their rank and file infantry, tanks and APCs on the desert outskirts of one ancient ruin, where a terrible precedent was being set--the Necrons and Tau were formally allying. With space marines from the Howling Griffons, Jade Legion, Crimson Wing and other chapters in support, along with radical Ordo Xenos Inquisitor Rhadamanthus Goh under the close supervision of puritan Ordo Hereticus Inquisitor Augustus, and a small but determined detachment of allied Eldar, the Imperium eschewed superheavies and titans for precision strikes to attempt to seize the critical objectives and split the nascent Necron/Tau alliance; in opposition, multiple Necron lords, three Monoliths, the Nightbringer and the Deceiver, and a massive Tau fire cadre rallied around an uplifted Necron Pylon superheavy.

Things appeared hopelessly bleak for the Imperium from the outset, as both an uncharacteristic timidity by the Astartes and an horrific display of inaccurate shooting made the oncoming Necron/Tau alliance appear unstoppable--especially when the Necrontyr played a 'secret weapon:' the unleashing of several captured Tyranid gargantuan creatures, which reaped a deadly toll on the Imperial lines. Things reached their nadir when a space marine librarian wheeled his bike to stave off a Tau flank attack--and immolated himself with his own psychic power.

As the Imperial line faltered, however, Inquisitor Augustus abandoned his watchkeeping role and led an Imperial charge from the very front, crossing the boobytrapped highway which demarked each front line first and heroically rallying Imperial forces. As tanks, dreadnoughts and APCS of every description disintegrated around it, a lone Howling Griffons Rhino surged after him, seemingly indestructible even when the Pylon itself turned upon it; the Mordant High Command proper arrived to contest the central objective; and Howling Griffon Sternguard and Crimson Wing terminators deep struck and droppodded into the very heart of enemy lines to wreak havoc. Concentrated Jade Legion Whirlwind Suppression Force fire whittled one Necron flank down until they phased out in the face of critical losses...and at the end, the result hung in the balance.

At that moment, Rhadamanthus Goh risked once again the wrath of his allies and reached out with his experimental radical psychic powers to seize the mind of one of the Tyranid monstrosities, and turn it against the wall of Necron Monoliths which appeared would carry the day. His effort was successful, and the monstrous Exocrine's bioweapon lanced out at his psionic command with destructive power...but the Monolith's living metal shell held. Invigorated, the Necrons moved their Monoliths to seize one objective and contest another, the Tau swarmed forward with their skimmers, battlesuits and Remora flyers...and the moment of possible Imperial victory slipped away.

The Necron/Tau alliance won a technical victory, seizing the central objective with one Monolith and contesting the space marines holding the objective in Imperial territory with another; the carnage aswirl around the objective in Necron/Tau space--with Sternguard, terminators, droppods, superheavy Pylons, Hammerheads and C'tan bashing away at each other--saw all objective-seizing Troops units swept clear by mid-battle, leaving it completely unclaimed. However, by completely phasing out one entire Necron army, the Imperials achieved a 'bonus' objective...leaving the bloody struggle for this critical point on Glavinus 5/7 a judged Draw.

That was a bitter pill for the Mordant 13th and their allies to swallow, however...as the tomb world was left a tomb no longer...and yet another world full of ancient and implacable evil was reawakened to plague the forty-first millennium...

Kudos to all the players who participated in Megabattle 5 of the Lucky 13s Campaign in North Texas; although the roughly 15,000 points in play was not enormous in scope compared to some previous campaign conflicts, the day saw all four turns of a standard Apocalypse game completed, including deployment, in little over six hours--with plenty of memorable moments and high adventure afforded by the efficiency of play and sporting atmosphere on display. While there will still be opportunities to see multiple superheavy vehicles take the field and armies in the tens of thousands on either side clash at arms, this 'compact Apocalypse' template is also one which will see future play, without doubt, after the day's success!

As for the Mordant 13th--on to the climactic event of the campaign, Megabattle 6, on November 8th, 2008!