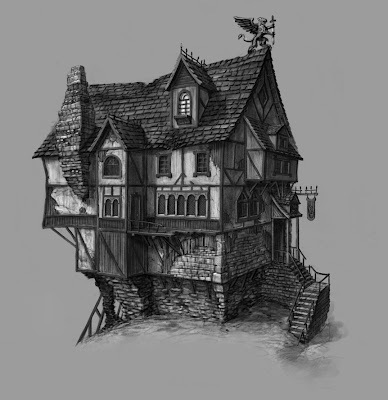 'Farewell to the Old Location' Event

The rogue wizard Hwyll's Tower of Sorcery vanished from a remote part of Talabecland called 'the Frontier' in a pyrotechnic display a generation ago. The Tower's Annex, an ancient manor house, remained...but left isolated by its location and fear that what had happened to the Tower could happen to the manor, the old building swiftly decayed. At last rumour, it had been infested by Skaven. Suddenly, however--the old manor house has begun...moving. One report indicates a shepherd and his entire flock were flattened when the Annex suddenly materialized five meters above their heads and dropped upon them; another says a Bretonnian questing party was halted in midcharge upon a band of pillaging orks when the Annex 'appeared' directly in their path. Players will muster standardly-composed Warhammer Fantasy forces of up to 1000 points to venture into the Frontier and try to find the moving Annex, and uncover its secrets--by participating in a final tribute event to HobbyAnnex, before its own move to a new location! But beware the consequences of this fantasy Annex moving with you--or on you!