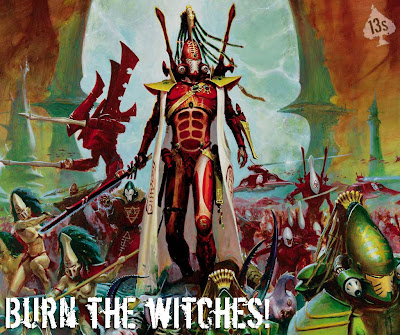 The campaign of the Mordant 13th across the galaxy has uncovered numerous Warp-bound mysteries...and where such mysteries are found, eventually the inscrutable Eldar must involve themselves. So it was that Mega-Battle 4 in the yearlong Apocalypse Lucky 13s campaign found the Imperium's struggle with daemonic forces crawling up from the Warp pits turned into a side show, as Eldar of every sort--craftworld, dark and raider--swept in...and in North Texas' particular corner of the planetwide battles that ensued, a true Eldar Civil War developed, as rival Phoenix Kings led each side into battle, Scorpion-against-Scorpion, Karandras-against-Arhra...with the full muster of the Inquisition squarely in the middle!

The being which claimed to be the dethroned Phoenix King Arhra led three full Dark Eldar Kabals and two Eldar Pirate Raider bands into battle, their center held by an eruption of Khornate might from the daemon pits below--led by an almost-unimaginably-powerful Avatar of Khorne itself! Rightful Phoenix King Karandras countered with a Craftworld Eldar force that included a magnificent Revenant Titan, siding with an Imperial faction that had, in response to the augurs and portents, mustered no less a force than *six* Inquisitors of the three major ordos, a full Grey Knight Commandery, a Battle Sister Canoness, a Space Marine Chapter Master and two Baneblades! Battle focused on an erupting Daemon Pit, dead-center on the main highway through a ruined city; at the end of it, Karandras had been striken from the fighting by taking full-on a close range Pirate fire dragon volley, but the space marines rescued his fallen form, contesting that objective, while Arhra paid for an extremely aggressive flank attack into the Imperial artillery lines when a Callidus assassin put an end to his vainglorious attempt to reclaim the title of Scorpion Lord, and the Adepta Sororitas held that objective for the side of Order. Disorder set up their forward command in a gilded ruin which the Imperial forces never really threatened, then snuck Dark Eldar mandrakes into Order's own forward command building, to contest it; the fate of the conflict thus devolved down to the outcome of the struggle for the descrated altar over the Daemon Pit in the dead-center of the fighting: an almost superheroic effort by the minions of Inquisitor Solomyn Kaine and the tenacious Wraithlords and Wraithguard of Karandras' Craftworld appeared likely to sweep it clear of every Khornate daemon which bubbled through into the Material world...but at the end, even as daemon princes, Soulgrinders, Juggernauts and the Avatar itself fell around them, the two remnants of a squad of bloodletter daemons remained on the altar, to contest it, as well--and with that, the enigmatic Eldar withdrew from both sides, leaving the conflict a draw, the forces of the Inquisition bloodied and confused...but still standing.

Kudos to the Mega-Battle's participants, all of whose forces had their moments in the sun: Dark Eldar Kabalists Avery, Jackson and Eric, Eldar Raiders Matt and Jeff, and Daemon lord Gama and Craftworlder Jack and his Imperial allies Josh, Kyle, Forrest, Bill and David.

The unique angle of having rival Phoenix Lords Karandras and Arhra (if that was in fact truly Arhra!) take centerstage in this 'Burn the Witches' Mega-Battle gave it a completely unique flavor, as because of this rivalry, in our battle Eldar actually attacked Eldar; this was a bit of Mega-Battle backstory created by the players themselves, which makes it the best sort...and the struggles of each Phoenix King, on opposite flanks of the battlefield, became the highlights of the day.

As the first Apocalypse Mega-Battle of the Lucky 13s campaign to be fought under the new V5 40K rules, the predominance of available saves in the new edition took center stage as the event's defining characteristic: the utter carnage which typified the three earlier Mega-Battles was greatly diminished this time around, as both sides--but especially Disorder, and at key times--made a law-of-averages-shatteringly high percentage of cover and invulnerable saves (greatly helped by rerolls from Matt's Farseer, who as result rivaled Order's Calidus assassin for 'model of the game'). This battle was significantly higher in infantry (and commensurately lower in superheavies, with only five total ontable, none of which blew up), as well, which magnified the effect.

At the end of the day, characters who have achieved renown since Lucky 13s began added to their reputations (and some new 'characters,' most particularly David's 'invulnerable' super-Rhino, etched their own fame!), over 27,000 points of men, aliens and daemons clashed, and twelve North Texas players edged closer to the necessary thirteen event stamps to join the hallowed roster of the Mordant Imperial Guard...the Lucky 13s!

Thanks and well done to them all!

On August 9th, at HobbytownUSA Dallas, the Mordant 13th 'Lucky 13s' find themselves in peril again, this time trapped atop a questionably-dormant daemonic pit and smack in the middle of a civil war between the most enigmatic of forty-first millennium races--the Eldar! Time to call in the Inquisition!

All specific conditions following supersede any information presented in the general scenario for the fourth Apocalypse Campaign mega-battle found on the Games Workshop website, upon which it is based.

SETUP: No Mans Land will be pre-set on the diagonal centerline of two 6'x4' tables, creating an 8'x6'' battlefield. Choice of Deployment side will be diced for between side commanders. All Eldar units will begin the game in Strategic Reserve *unless* they field an Apocalypse Datasheet which requires otherwise, in which case the Datasheet rules stand, or unless they are a side commander, in which case they may choose to begin the game deployed. All other Scenario special rules and conditions, as outlined on the website, apply.

Some of these rules of participation *are* keenly-drawn. No offense should be inferred by any participant which a given rule excludes, however: in all cases, they have been imposed based on lessons learned in previous Apocalypse Lucky 13s events, with an eye toward insuring the most fun event possible within the time- and physical-limitations the HTUD Game Hall affords. Voluntary compliance to these pre-announced restrictions saves event moderators having to exclude participants who do not follow the rules from playing in future events, which neither person involved enjoys very much...and which runs counter to the whole point of Apocalypse, which is having fun on an enormous scale.

The mystery has deepened. The drawn lines have become murkier, ally and enemy harder to distinguish. Yet the stakes remain monumental. Will you be a part of deciding the day? Join--or oppose--the enigmatic Eldar as the Lucky 13s pursue their destiny in 'Burn The Witches!'