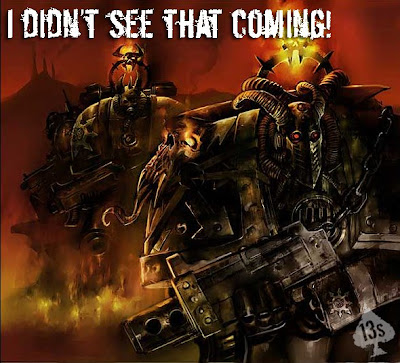 The third mega-battle in Games Workshop's year-long Apocalypse Campaign, The Lucky 13s, 'I Didn't See That Coming!,' will take place Saturday, May 31st--pitting the Mordant 13th Imperial Guard and the Daemonhunters of the Ordo Malleus, with their Imperial allies, against the might of the arch-foe...the Ruinous Powers of Chaos!

The pattern for HobbytownUSA Dallas' event will closely follow the largely-successful model of the second mega-battle in March: participation slots will be limited to numbers the Game Hall can comfortably handle, and interested participants must sign up in advance, no later than by the completion of the Daemonic Council Painting Event the prior Sunday, May 25th, and be committed to having internet access and some amount of available time for the week immediately leading up to the mega-battle on the 31st, as both sides will again coordinate amongst themselves during that week to present one army list, representing the entire side, Imperial or Chaos.

The Sign-Up list will be available at HobbytownUSA Dallas Friday, April 25th. Paid members of the HTUD Game Club will get first shot at signing up for slots, through the end of April; everyone will be able to fill remaining open slots beginning Thursday, May 1st. Remember before signing up and committing to the mega-battle that the Ard Boyz Regional is that same day, as well as the IPMS Regional convention. Play will begin immediately when HTUD opens Saturday at 10am, and will run at least until the store closes at 6pm, with the possibility of running past closing, as was managed recently for the Ard Boyz tourney, if store manpower allows.

The Lucky 13s Campaign has been an enormous success in North Texas thus far, and these mega-battles are its centerpieces. This clash will be monumental, as waves of Grey Knights, Inquisitors, Space Marines and, of course, the Lucky 13s face Chaos Space Marines, Daemons, Traitors, Heretics, Cultists, the Daemonic Council, and Ahriman of the Thousand Sons himself in the third mega-battle of the Lucky 13s Apocalypse Campaign, 'I Didn't See That Coming!,' Saturday, May 31st, at the Game Hall of HobbytownUSA Dallas!

All specific conditions following supersede any information presented in the general scenario for the third Apocalypse Campaign mega-battle found on the Games Workshop website, upon which it is based.

SETUP: No Mans Land will be pre-set on the diagonal centerline of two 6'x4' tables, creating an 8'x6'' battlefield. The Imperium will have choice of deployment zone, due to their successes in the prior mega-battles. A Chaos Summoning Circle will then manifest in the center of the table, in No Mans Land, representing the focus for the Warp Rift Apocalypse Formation. This will count as a Vital Objective per the Apocalypse Rules. Three additional Objectives will then be declared for each side, within their Deployment Zones. These physical Objectives will replace the Army Agenda objectives utilized in mega-battle two--but players in this event who achieved their Army Agendas in the previous game *will* still get their special benefit.

MUSTERING FORCES: Participation at HobbytownUSA Dallas will be limited to six Players per side on the primary 8'x6' table. Four additional players--two per side--will be able to participate via the separate 6'x4' artillery bombardment table, about which more see following. Sign-up will take place in person at HobbytownUSA Dallas, with interested participants needing to be certain they can meet the following conditions for play:

The sides have been drawn. The Imperium has dug in, in the name of uncovering heresy...and surviving, to reveal it; the Powers of Darkness have responded, bringing all the forces of Chaos, including the Daemonic Council and perhaps Ahriman himself to contest the outcome. The stakes are monumental. Will you be a part of deciding the day?