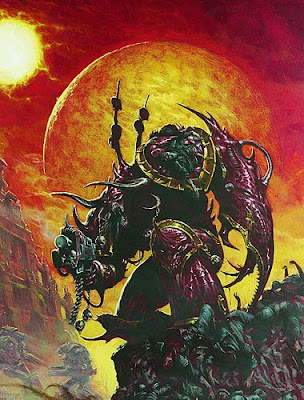 It is always worth noting that every model except one received at least one vote in some category. I am not sure it is worth noting that the only model which got NO votes was the one *I* painted, but in the interests of full disclosure, there you are :) The Chaos Spawn category was, curiously, the most hotly contested, with the model voted Favorite Overall a Spawn and both top finishers in the Favorite Youngbloods offering Spawn (Brady's Spawn was second in that category and won it when Bob's won Overall, and Blake's Spawn was second in the Youngbloods category, winning that when Brady's won in the Spawn category). Special mention should be made of Ashley McDaniel's Daemachinex Character model: it finished *one vote* behind Eric's Changer of Ways in that category, and finished third overall behind Bob's Spawn and Eric's Greater Daemon (and is probably the best painted model I have seen Ashley produce, besides).

HobbytownUSA Dallas and Games Workshop provided all five winners with prizes of Warhammer and 40K model boxed sets--from Bretonnian Knights to a Khorne Lord to Tomb King Chariots to Goblin Spider Riders to a Carnosaur!--so get by HTUD at Walnut Hill/Central Expressway and admire the submissions in the game display cabinet, opposite the Mordant 13th High Command they will soon face on the tabletop; thanks again to HTUD and GW for sponsoring the ongoing Lucky 13s Campaign, and to the Daemonic Council participants for completing their models, and to such an excellent standard!

The seals have been broken. The wards have been shattered. The thousand-year-imprisonment is at an end. And the Daemonic Council is loose upon the galaxy once more.

Participants in the HobbytownUSA Dallas Lucky 13s Apocalypse Campaign banded together to create the Mordant 13th High Command Squad in March, to lead the 'good guys.' Between now and Sunday, May 25th, participants will have the opportunity to return the favour, for the 'bad guys,' by purchasing, constructing, converting and painting a model to represent the Daemonic Council of Colfax--which will then lead the Chaos forces the following Saturday, May 31st, in the third Lucky 13s mega-battle!

Colfax was a system of Imperial worlds which, millennia ago, were corrupted by the Ruinous Powers. A gatherum of the most powerful daemonic entities completely enslaved the worlds, so totally that the only response the High Lords of Terra could make was exterminatus--obliterating each world, and every living thing upon it, in turn, until the daemonic leaders of the rebellion were trapped on the last surviving moon of the system. Instead of destroying it, however, and releasing the entities to the Warp, the Inquisitors of the Ordo Malleus contrived to seal the Daemonic Council inside a towering obelisk, making of the moon in its entirety a daemonifuge, an eternal prison for the rebellious daemons, then cast the moon adrift through space, and declared it perdita, prohibited from all contact. And so it--and they--remained until recent events, when representatives of a host of races were lured to the Prohibited Moon of Colfax by the false projection of the mysterious Warp signature which has been driving the campaign-across-the-galaxy of the Mordant 13th Imperial Guard. The races battled across the moon, until their efforts unwittingly burned out the hexagrammatic wards sealing the Council in their nether-prison: the obelisk faded from existence in this physical reality, and in a geyser of screaming Warp entities, the Daemonic Council returned.

The Council is led by the Daemachinex, an Arch-Daemon of Chaos Undivided who bows to no one, man, myth or machine. Daemachinex, an entity part muscle/part machine, is attended by Fellsoul, a daemon of smoke and shadow who acts as Daemachinex' advisor in all matters sorcerous. The four chief Ruinous Powers which facilitated Daemachinex' rise to mastery over Colfax are represented on the Council each by an ancient and obscene Greater Daemon: Tzeentch by a vulturous Lord of Change, Khorne a rampaging Bloodthirster, Nurgle a grotesque Great Unclean One and Slaanesh a mysterious Keeper of Secrets. In its glory day, the Council boasted a great number of Daemon Princes stationed just below these most-powerful entities; trapped for centuries and cut off from their patron powers, the Princes of the Council are now fewer in number, but those which remain will join with their principals to seek vengeance without quarter...and they will bring with them their brethren, reduced by their eons of imprisonment to mindless Chaos Spawn, driven now only by their abject hatred for those who brought them low....

Interested participants will have the option of signing up for one of the six Council choices which require specific models--*or* they may create their own member of the Daemonic Council, but signing up for either a Daemon Prince or a Chaos Spawn. In the case of the former, the participant who signs for that choice MUST use the indicated model; in the case of the Daemon Princes and Chaos Spawn, players are free to use their creativity and imagination, with the caveat that their submissions must be Citadel miniatures or conversions primarily based on Citadel miniatures, and must clearly and recognizably represent the Daemon Prince or Chaos Spawn entry, using existing GW models and imagery as guidelines.

Participants must have their model completed, painted and based by Sunday, May 25th at 1pm, when they will be gathered together and displayed for the week leading up to their showcase mega-battle the following Saturday. As with the High Command Group, participants and judges from HTUD will be allowed to cast a ballot for Favorite Model, with the winner collecting a prize from HTUD and Games Workshop, and there will be random prizes distributed to eligible participants, as well.

Please sign up in person at HTUD for the model you wish to complete. These models will remain yours to keep and use in your own 40K army; the only requirement is that they be submitted to HTUD in finished state by Sunday, May 25th at 1pm, where participants present will vote for their Favorite Model. The Council will then remain on display until Saturday, May 31st, where it will lead Chaos against the Imperium and the Mordant 13th in Campaign Mega-Battle Three! Specific models must be used where indicated in parentheses following; Daemonic Princes and degraded Chaos Spawn may be representative models of the participating player's choice from the Citadel Miniatures range. Event judges retain the right to disallow any model deemed inappropriate from inclusion in display, including eligibility for prizes and use in battle. Participants who sign up for a specific slot are both making a commitment to the event and denying that slot to other interested participants in turn; failure to complete the signed-for model on time could result in the participant being excluded from future Lucky 13s and other hobby events at this and related venues.