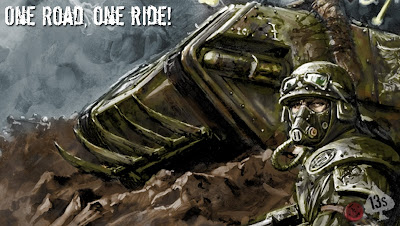 Fourteen players found their way to the hostile surface of the Prohibited Moon of Colfax, and survived its perils--and each other--to reach the obviously-not-natural spire sitting menacingly astride its day-to-night terminator, and unlock its secret, in the first April Lucky 13s event, One Road One Ride, at HobbytownUSA Dallas.

Players discovered that the rogue moon had been locked in stationary orbit by a tiny, brilliant and completely unstable white dwarf star (which they promptly dubbed Grombrindal). They battled over an 8'x6' Apocalypse table which represented this state, with one side overexposed by white light, solar flares and radiation and the other, across the terminator line, shrouded in night-fighting darkness. An additional unconnected table represented a warp gate at the far end of the moon's dark side, where competing vehicles could find themselves inexplicably hurled by the clash of energies at work on Colfax, and have to fight their way back.

The race to reach the mysterious spire at the moon's center was a seesaw affair, with fast vehicles like Bob's deep-striking Ultramarines land speeder claiming it quickly, but failing to retain control of it long enough to decipher the arcane wards scrawled across it, to win the game. Alliances were formed--and then broken in turn--as players tried to find the perfect tactics for reaching the objective quickly enough to have a chance to win it, but not so quickly there were enough guns still active to knock them off of it.

In the end, Ashley's Thousand Sons Defiler, Alex's Winged Hive Tyrant and Jack's Techmarine Razorback all came close, and Josh's Jade Legion Razorback (led by the wounded but still very-much-alive radical Xenos Inquisitor Rhadamanthus Goh) dropped its passengers and made a late run under the guns of alliances forged on both flanks...only to meet its fate at the claws of Brady's Carnifex, which then survived a hail of fire from every compass point on the table for over a turn to win the race for the mystery obelisk.

The climax was tremendous, as Eldar, Chaos and Space Marine guns failed to bring the monstrous creature down--leaving the last player to move in the turn, Chad, to try a sweeping tank shock with his Falcon in a final desperate gamble to dislodge the Carnifex and keep the game going. The moment heightened as every consequence, intended and unintended, was considered, and every response calculated: the Falcon crested into the difficult terrain around the objective, surviving rolls which might have brought it down; the Carnifex chose death or glory, with virtually any result but snake-eyes insuring the destruction of the Eldar skimmer--which it promptly rolled; but then everyone remembered the unpredictable energy shields around the obelisk, the roll for which displaced the Falcon back off the spire.

The Carnifex met the victory conditions, the ancient hexagrammatic wards carved into the towering spire flared brilliantly to life and then burnt out, the structure itself lost its integrity in the physical world before the surviving warriors' eyes, shimmering out of existence--and allowing a geyser of long-trapped Warp entities to scream into existence from whence they had so long been imprisoned. The secret of Colfax moon stood revealed: the entire moon was a daemonifuge, a millennia-old prison holding a gatherum of mighty daemonic entities--known as the Daemonic Council--which had once corrupted and ruled over an entire Imperial system...and with the wards and seals destroyed, the Daemonic Council was free again, to lead the Forces of Chaos against the Mordant 13th, in next month's Lucky 13s mega-battle!

As for the winning model, it reaped the benefit of proximity to so much unleashed protective energy: that specific model will benefit from a 4+ Invulnerable Save in that mega-battle next month.

Other highlights (and lowlights) of what was a fine afternoon of multi-player gaming included David's Wave Serpent suffering a crisis of confidence in the first turn and deciding NOT to race onto the objective, as he had built it to do--whereupon it was immediately immobilized and spent the rest of the game sitting in the blinding light of Grimbrindal, doing nothing; Blake's Thousand Sons Rhino racing to protect Ashley's flank and weathering an amazing volley of fire from a fusion-gun-wielding squad of Fire Dragons--only to be immobilized by a lucky shuriken-cannon shot; Kyle's Ultramarine Land Raider Terminus, undoubtedly the most dangerous weapon on the table, suffering bad break after bad break, from turns of star-blindness to actually shooting itself, when one of its rounds of fire drew a solar flare from the white dwarf star to it and rebounded lascannon fire back at it; everyone on the dark side of the moon rolling laughably for night-fighting range, but especially Blake's Thousand Sons and Jimmy's Ultramarines Predator, which stood less than two feet from each other for more than half the game without ever getting off shots; poor Forrest's Exorcist, without doubt the most-shaken vehicle in the game; and Barret, playing his Deathwatch dreadnought 'Thunderbolt' in his first-ever game of Warhammer 40K, surviving the entire battle without a scratch, despite being shot at by--at least--a Predator, a Falcon, some Striking Scorpions, a Fire Dragon Exarch with a Fire Pike and a Defiler, being assaulted by a Winged Hive Tyrant, and--in the final turn--being tank shocked by Eric's Space Wolf Land Raider...which Barret death-or-gloried and, with one lascannon shot, blew to wolfy smithereens.

There are still some kinks to work out with these 'massively-multiplayer' battles (to borrow a phrase), the down-time between turns and the general level of talk when players are not directly engaged which results, probably foremost. But some of the steps undertaken this time around--particularly the compactness of forces controlled by each participant--seemed to go a long way toward remedying some previous issues (we easily finished the game in under three hours, for example)...and the synergy which comes from having over a dozen enthusiastic hobbyists all playing toward one goal, forming and breaking allegiances and sharing (or keeping) secrets is, I think, undeniably worth it. So expect to see variants of events like this again, soon...perhaps the next time with *all* superheavies!

The second April Lucky 13s stamp-eligible event concludes next Sunday, as players complete and submit 1500-word-maximum short stories featuring one of their Lucky 13s Campaign-participating characters. I am hoping the entries for this event will further personalize future battles...and illuminate the nature of some of our deepening grudges.

The first May Lucky 13s event will spring *directly* from today's multi-player battle, as the Daemonic Council freed by the race to the obelisk will manifest to wreak their vengeance upon the Imperium of Man, in a painting contest to culminate Sunday, May 25th. Interested participants will be able to sign up at HobbytownUSA to submit models (which, unlike the Mordant 13th High Command, will in this case remain theirs to keep and use after), and then the entire Council will lead the Chaos assault against the Mordant 13th in the May 31st Lucky 13s Campaign mega-battle.

Sign up at HobbytownUSA Dallas for that May 31st mega-battle will be announced soon, once the specifics of the scenario are released by Games Workshop.

And watch adeptusnorthtexas.com for word of potentially a third Lucky 13s stamp-eligible event in May, which will be something completely different...