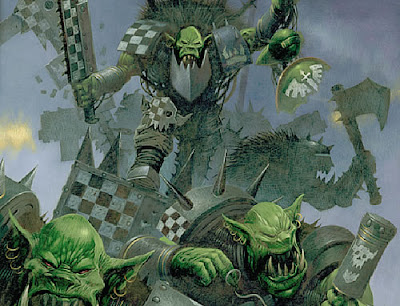 Eight Warhammer 40,000 force commanders squared off at Games Workshop Grapevine Mills in Week One of the four-week, February-long North Texas Combat Patrol tournament series...The Waaghmbat Patrol (though The Waaghmbat himself was--perhaps in keeping with his mysterious persona--inexplicably absent this first round).

Highlights of the event included an impressive final battle on the top table between Bob and Jay, won by the latter when his broken force commander managed to rally in the final turn and claw his way back onto the objective; an horrifically bloody battle around a central objective between Pete's hand-to-hand Orks and Michael's hand-to-hand Genestealers; and the most hideous dice-betrayal ever committed by Fate against one race in one tournament, wherein Chris and his Orks won the Murphy's Luck Award by losing *every game* by one critical, last-round dice roll or another--and Roman and his Orks would have trumped even Chris's bad luck, and earned him that award, had not he done so admirable a job of keeping his game face through it all and playing on that his fellow gamers voted him Best Sportsman (a few highlights: laying a template weapon over seven fire warriors needing only 2s to wound--and rolling five '1s' out of seven; having his trukk blown every game before it had a chance to move except one, in which it got the careen result it needed--then promptly spun 180-degrees on one wheel and crashed back into his deployment zone; and the capper, his Weirdboy Grubgutz, failing *every* psychic test he took the entire tournament--wounding himself more than once--except one time...in which his attempt to tellyport scattered him and his entire squad off the table...)

Maybe someone in green *should* have summoned The Waaghmbat...

Thanks to the staff of GW Grapevine Mills for hosting the event, and providing over $200 in models, gift cards and other terrific prize support. On to round two. Waagh!