Results: HobbytownUSA Dallas Lucky 13's Mega-Battle 'If Its Green, We Can Kill It!' 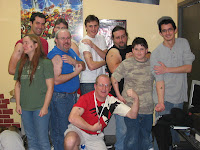 Nineteen participants clashed over 25,000 points of Imperial Guard (with some Adeptus Astartes and Adepta Sororitas in assistance) and Orks (with Chaos and Tyranids joining them for the melee) in the first mega-battle of the year-long Games Workshop Warhammer 40,000 Apocalypse Lucky 13s Campaign, 'If Its Green, We Can Kill It!' as the Imperium, led by the Mordant 13th, fought to oust the Greenskins from the ruins of an Imperial City. 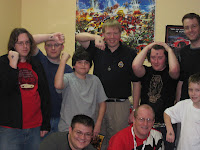 Three buildings had been heavily 'orkified' by the invaders, and the massive-scale fighting devolved down to control of them: a multi-story ruin the Orks had made into a combination laager and HQ, a sheet-steel platform from which they were running their ground-to-orbital comms, and a massively orky fort/defensive stronghold in the center of the city. The Imperium seized the HQ and fort early--but the orks had wired them for 'self-deestrukshun' and not one but both blew sky-high, along with most of their Imperial occupiers. That left the forces of Disorder in good position, with control of the only remaining objective, a strategic asset that gave them double points for it if they could retain it, and a number of expensive and powerful units in position to seize it. But the Imperium proved they had a little destructive power of their own, by racing a Rhino toward it and hurling a Vortex Grenade at its defenders...which destroyed the objective, as well, banishing it to the Immaterium and ending the struggle for the city in a deadlocked draw. 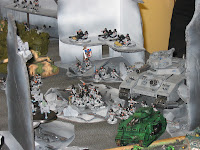 There were at least three superheavy Baneblades, a Valkyrie flyer, an Armoured Company and an Earthshaker Battalion datasheet formation on the Imperial side; the Orks unleashed *two* Green Tide datasheet formations, a Skullhamma superheavy--and both a scratchbuilt Pulsa Rokkit and a truly awesome, table-dominating scratchbuilt Stompa Titan, with their Forces of Disorder allies adding a Chaos Warp Rift and a Tyranid Exocrine gargantuan creature to the mayhem. The battle *felt* apocalyptic.

Particular kudos go out to several participants and contributors: the Friday Night Terrain Building Irregulars, especially Bob and Steve, for a terrific looking table full of new and refurbished scenery (and Jeff, whose excellent Ork fort finally got the starring scenario role it deserved--and lasted one whole turn before being obliterated :); Mekboy scratchbuilders Aaron and Tommy, for the excellent Ork Stompa and Pulsa Rokkit models; Keith at HobbyAnnex, for donating several buildings (including the ork comms platform with its working lights and electronics) and a Skullhamma; Lucky 13s deputies Matt and Eric for all their assistance planning, preparating and executing the event; and the HobbytownUSA Dallas staff of Ted, Brad, Megan, et al, for agreeing to be a Lucky 13s retail site, and continuing to support the hobby so well.

As is always worth noting, Apocalypse games are far less about winning and losing and far more about the great storytelling moments which occur when forces so epic clash on the tabletop. A few of my favorites: 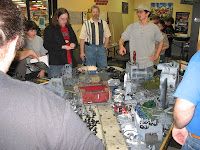 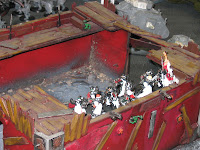 Thanks to all nineteen participants, who earned a Lucky 13s Regimental Tattoo and a campaign participation stamp for their efforts. Keep an eye directed to http://www.adeptusnorthtexas.com for details of a third Lucky 13s participation event coming in late February/early March, an exciting and unique and arguably *historic* Lucky 13s painting event which will culminate Sunday, March 23rd...and the second Lucky 13s mega-battle, Saturday, March 29th, which will take the Mordant 13th and their Imperial allies back toward the Medusa system, toward rumours of Inquisitional purges and radicalist behavior...and toward the very maw of the Great Devourer...