Results: The Crash of the Scarlet Hope 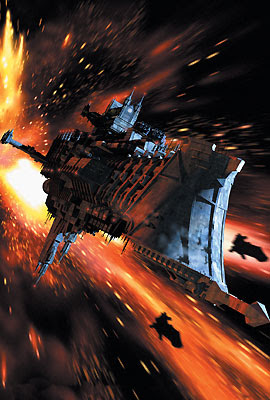 26 players. 6 superheavy vehicles or gargantuan creatures. Over 23,000 total points. 13 Defenders of the Imperium rallied to the starport planet of Yorke's Drift--three Baneblades, several detachments of the Ultramarines including a Whirlwind Suppression Force and a Vindicator Linebreaker Formation, Terminators of the Dark Angels Deathwing and a Terminator Titanhammer Formation, Sisters of Battle, the Imperial Guard including an Ogryn Auxilia, and the Black Templars, all led by a Puritan Inquisitor and Marneus Calgar--and trudged through the snow to the smashed and broken city's edge, where the wreckage of rogue trader Ormin Del'Trieste's interstellar cutter the Scarlet Hope smoldered and crackled on the verge of a warp core meltdown. There they met a hastily-cobbled-together coalition of 13 Traitor and Xenos--war engines including a Slaaneshi Baneblade, a Tzeentch Warhound Titan and a Tyranid Exocrine, a half-dozen rampaging Carnifexes five of which rained down into the midst of the Imperial tank line via Mycetic Assault, two Traitor Linebreaker Formations, a Khornate Maelstrom of Gore which darkened the skies with bloody rain, four Tau detachments including a full-Hammerhead Armoured Interdiction Cadre, all led by a Radical Inquisitor at the head of a Dark Eldar Splinter Raid Force and Lucius the Eternal--and an horrific melee ensued, as both factions raced to seize the crashed starship's cockpit, engineering calculus, and the cavernous, sputtering main drive itself in order to learn the rogue trader's secrets.

Congratulations and thanks are extended to all 26 full participants (as well as the patiently-overseeing parents and part-time players who stepped in, as well) for making this event run as smoothly as could possibly be hoped. Having over two dozen players wrap up three full Apocalypse turns in only five hours is a testament to focus, organization, good sportsmanship and a dedication to having a good time, and seeing that one's fellow hobbyists did as well, and I applaud you. The success of these events creates a conundrum for organizers: limiting it to, say, a dozen players would likely ensure a greater level of involvement and potentially more fun for those dozen--but (in this case) would leave another 14 players unable to participate at all. Without question, there will be events in future which specifically do require advance signup or other participation limiters, such as (perhaps) Club membership--but as today showed, there is a place in the hobby for the spectacular, as well, and when players generally 'get it' as completely as most participants in today's event obviously did, spectacle can be pulled off, as well.

In the end, the Traitor/Xenos faction had an overwhelming second turn: almost three thousand additional points of Tau poured onto the table, and poured firepower onto the Imperial armour, backed by the one Tyranid Mycetic Assault hitting home and the other Tyranid Exocrine continuing its tradition from previous Apocalypse games of near spot-on artillery barraging; between the three of them, they virtually emptied half the board of Imperial armoured strength. The Imperial reserves hit back furiously, and the heroic charge of the Terminators into hand-to-hand combat with the Chaos Titan will be a tale long told in Imperial annals, but by the mid-point of the third and final turn, the Heretic/Xenos alliance held all three objectives--with Tau Crisis Suits surrounding the engineering calculus, a swarm of expensive units encircling the cockpit wreckage, and the bold Radical Inquisitor sitting atop the star drive itself for a third full, unchallenged turn--and it seemed unlikely the Imperial forces could rally.

However, each side could legitimately claim to have got what they came for: both Inquisitors had informed their hastily-drawn up factions of rogue trader Ormin Del'Trieste's true secret--his rogue trader charter was a facade, masking his true identity as an Inquisitor of the Ordo Hereticus! In seizing the cockpit, the Xenos hoped to capture Del'Trieste alive--and though he escaped, they retrieved more than enough proof of his Inquisitorial identity to prevent his furthering his activities against them in that guise...and likely enough clues to track him down for the final solution, as well. Meanwhile, by retaining control of the engineering calculus, the great secret of Del'Trieste's Scarlet Hope remained safely in Imperial hands: its one-of-a-kind C'Tan Phase Drive, a unique and priceless relic.

As for the drive assembly itself? The last bitter struggles atop it proved to be too much for its already unstable superstructure to withstand...and as Guardsman, Commissar, Dark Eldar and Radical Inquisitor fought to the death atop it, its warp core ruptured irrevocably in a towering, reality-rending explosion that sent the combatants across the battlefront retreating for their lives.

Memorable moments abounded: Marneus Calgar and his squad of space marines seeing off a Tyranid abomination in close combat, the wall of Tau skimmers that arrived in echelon on the Xenos right flank in the second turn, the Titanhammer force commander's bold attempt to destroy the drive terrain piece with a vortex grenade backfiring as it bounced off the towering engine assembly and proceeded to dance around it for the rest of the game (coincidentally doing in most of the Maelstrom of Gore in the process), the heroic charge of the Titan by both the Terminators and the Ogryn, the utter devastation unleashed by the Black Templars charge on the Loyalist right flank (and the lone Chaos lord who withstood it singlehandedly), the uncanny accuracy and deadliness of the Exocrine's barrages, the Radical Inquisitor standing almost defiantly atop the central wreckage for virtually the entire game...these and more moments of story will linger long after the outcome is long forgotten, and are the reason Apocalypse is such an outstanding supplement to the 40K experience.

What would *I* have done differently? Objectively, I saw each side make a significant error which led to the drawn outcome. The Heretic/Xenos faction committed 'objective claiming overkill' by stacking so many expensive units around their vital objective that the Imperium never had a hope of knocking them off it--but then had nothing backing up the defiant Radical Inquisitor and his fragile Dark Eldar when the Loyalists finally took it to them, in the last turn. The Loyalists, on the other hand, deployed their Inquisitor--and his potentially-equally-useful ally, the techmarine--as far away from the Drive objective as it was possible to be, and then never made any significant effort to close the ground. Fortune favors the bold--had he lived, the Radical Inquisitor would have gotten to make three bonus tie breaker rolls, one for each round he was at the objective, studying it, while the Puritan Inquisitor and his ally lived, but earned none.

And the answer to the *most-asked question*--what would have happened if either the Vortex Grenade (which came within a half-inch in the final turn) or one of the terrain-destroying Linebreaker Formations had breached the smoldering C'tan Phase Drive during the course of the game?

Well, the turn it happened every model within a 36" circle around the drive terrain piece would have had to make either an Invulnerable or applicable cover save or be instantly killed in the blast, and then in the turn following every surviving model on the table would have had to make an armour save or die in the ensuing shockwave. For starters...

But (as the Titanhammer commander would doubtless have said, with a jaunty smile), that *would* have denied it to the foe :)

Thanks to Games Workshop and HobbytownUSA Dallas for hosting the event, providing every participant with a Hobbybuck gift certificate and supporting the event with over a hundred bucks worth of door prizes (all nicely ork-themed, for upcoming events!). Especial thanks go out to Bob and the Friday Night Terrain Builders for providing a FANTASTIC table, not only the terrific C'tan Phase Drive piece but also our first Titan-masking-sized Apocalypse urban terrain pieces.

Watch http://www.adeptusnorthtexas.com for announcements of Warhammer Fantasy, Warhammer 40K and Apocalypse events for 2008. The Battle for the Scarlet Hope has been fought--but the war goes on. For in the grim darkness of the far future, there is only...WAAAAGH!